Myself, my wife and two friends (all non-birders (except me)) flew out from Manchester Airport at 11:15 on Sunday 10th. Feb. We arrived in T2 at Singapore’s Changi airport at 11:15 uk time (a 12 hr flight after favourable tail winds). Then a quick transfer to T3 via the sky train (monorail) and 45 minutes after arriving we were airborne again. However whilst taxi-ing on the runway I spotted 3 Cattle Egrets, a single Lark species and 6 House Crows.
We arrived in Auckland, New Zealand at 00:55 local time on Tuesday 12th. Feb (11:55 am Monday UK time) after a further 7 hour flight and at around 2 am we checked into our hotel. I struggled to get to sleep and got up at 6:30 am, by 6:45 it was light and I spotted my first NZ birds through the hotel window, firstly a feral pigeon and then 8 or so Mallard, followed by my first NZ endemic, a Red-Billed Gull*. During breakfast at a local cafe I spotted European House Sparrows and a Blackbird. Later in the morning we went to the Skytower (the tallest building in Auckland) at the base of the tower were several Welcome Swallow. 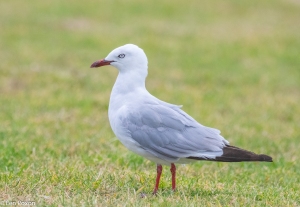 In the afternoon we took the ‘hop-on/hop-off bus’ that took us on a route that passed the docks and along the shore to the east of the city to Bastion Point, before turning south to the Auckland museum. Along the shore I noted Variable Oystercatcher*, Black-Backed Gull and the ever present Red-Billed Gull. Whilst my wife and friends visited the museum I took a walk around the adjacent Domain park (including the Wintergarden).
Here I saw, a pair of Australian Magpies, In search of a Stinkhorn